Valentine Hall, Hamrun, July 12th, 2017: A dark haired woman in a long white dress stands outside the front doors on a hot pavement. It is 6.55pm and the sunlight is at ankle level, flickering over her silver platform shoes. She smokes a cigarette as “(Today I Met) The Boy I’m Gonna Marry” by Darlene Love plays in the background. Her carefully made up eyes follow the traffic.

Summer, 1986, Valletta: A dark haired girl in a long white dress stands on a pavement outside a church. She’s 6 years old. Her ears are pierced. Her eyes sometimes catch the camera on the other side of the street as she begins to follow her group, although she seems on edge, uneasily bobbing along in the sea of little brides. All the grown ups look proud.

The air is stifling inside Valentine Hall and the bar is open. Withered party balloons droop from ornate wall sconces like dried flowers and just a few people are here for now. There’s a bunch of seating in the middle; tables with plastic tablecloths have been set out. The party is just beginning and they’re a bit sticky already but it’s ok, so are we. There are two choices of drink for guests. Campari or wine to suckle from a cartoonish ceramic teat, made en mass, 50 of them present tonight and each one a dismembered right breast without a partner. 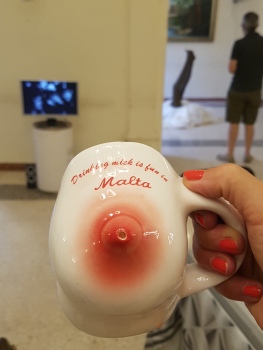 We laugh, we cringe, we greet our friends and some of us manage to pretend this method of imbibing is normal as we sup, exchange pleasantries and ask each other who actually buys these things.

Our dark haired woman is busy. With her back to us and her face set, she performs women’s work as the spurts of water from a row of seven titty mugs splash into plastic buckets and overflow all over the terrazzo floor. The boob fountain is a hit and everyone laughs and films it, posts it, but almost nobody helps the woman mop the water and the muddy footprints. We watch her in a perpetual ritual of mopping, emptying and refilling the source. A job she didn’t quite expect to be doing.

In the corner of the room, next to the long DJ table where two guys blast out wedding hits, another ritual is going on. Projected onto sheets of rice paper, scenes of two young girls are interwoven, and each dances without inhibition or self awareness, copying moves they’ve seen on MTV. They swish and boogie to music we can’t hear although sometimes it matches up to the sounds from the booming PA system.

One mini Blues Brother, and one bopping 4 year old with dark hair passing through the rites of childhood, still oblivious to the eyes that will follow them all their lives. It’s cute to watch, but they’ll never be able to return to that place. It’s called “An Intrepid Pas De Deux: Pre-shame”.  Later, the projector will overheat and the dark haired woman will go behind the rice paper screen to switch it off. She emerged, dramatically bursting right through the paper, stuffing pieces of this mega host into her mouth and we all clapped. 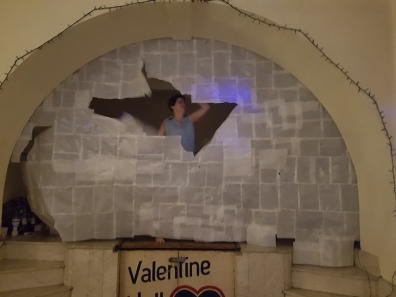 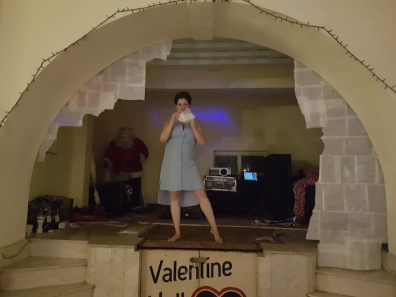 Outside for another smoke and it’s dark now. Red lights in the busy street. Brake lights and stop signs pulse like gaudy neon hearts. The pavement sports a little cluster of cigarette suckers lately turned emboldened boob sippers, and on the way out we pass our little girl in the white dress sitting in a chair having her hair combed. Older ladies surround her and smile. The girl smiles too, but her face drops now and again when she thinks she’s not the focus of the lens.

Darlene Love is still singing about impending nuptials. The girl will soon leave the house under the camera’s watchful eye and go to the church for her wedding. The house is called ‘Ave Marija’. A frilly lace handbag dangles from her tiny wrist, although I don’t know what’s in it. 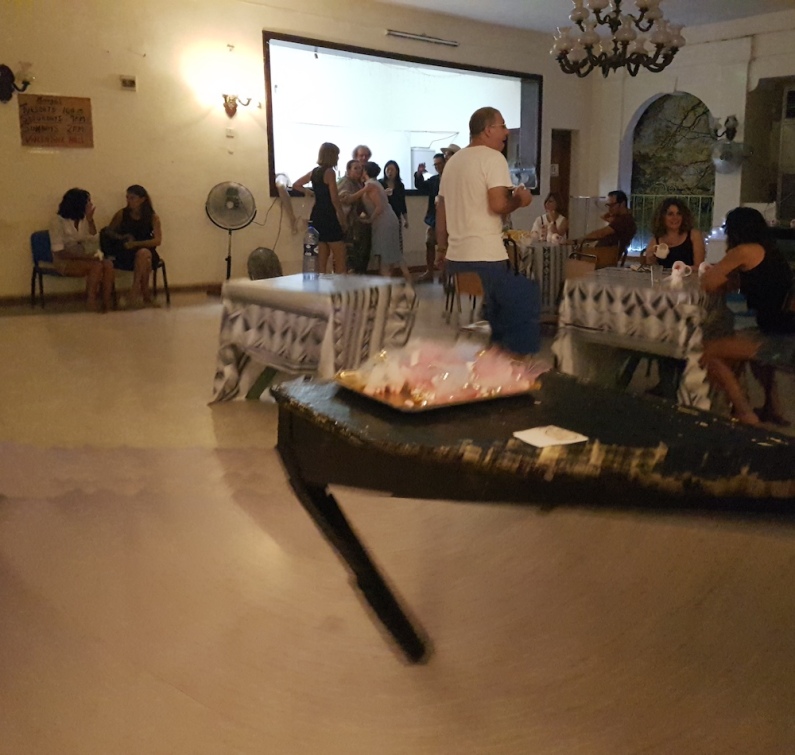 “Pick them up. Pick them up, they’re for people to take” says the dark haired woman in the white dress as she points to pastel perlini and pastel printed cards neatly laid out on the table. She’s lost her silver shoes thanks to the mopping and the hem of her dress is grubby, but she still plays hostess. On the back of the kitschy 80s cards featuring saccharine drawings of babies are excerpts from messy divorce proceedings. A child is mentioned too, but apparently X seems fine. Bright and unaffected. Attached to the net bags of hard sugary sweets a label reads: Plaintiff vs Defendant. Nearby, there’s a bride in a silk gown who seems to have taken a nose dive into the floor. You can’t see her face.

Three busty Camparis in. I’m hungry, are you hungry? There’s a TV playing old Maltese cookery shows and the famous lady on the show seems very busy with all that rolling and stuffing of meat.

Anyway, lets get filled up bros, It’s not a party without snacks to soak up the booze. How about a sexual breakfast? Or an offering from a bakers father? We’ll have pastizzi, just reach between the legs and grab ‘em. It’s funny.

Other things are happening at this party, and as the boob fountain gurgles, a strange scene in black and white loops on a computer monitor. Groups of people are weirdly stretching and contorting, so it looks like it could be some kind of dance warm up, although the title reads “Mario Makes a Play”. If you get up close, you can hear the Benny Hill theme tune playing relentlessly like a mad wasp, but it’s being drowned out by Madonna singing “Like a Virgin.” We all love this song. The DJs are great. Everyone loves Madonna. And the holy virgin, obviously, since we’re in Malta. Who will be first out on the dance floor to go and wiggle their butt? 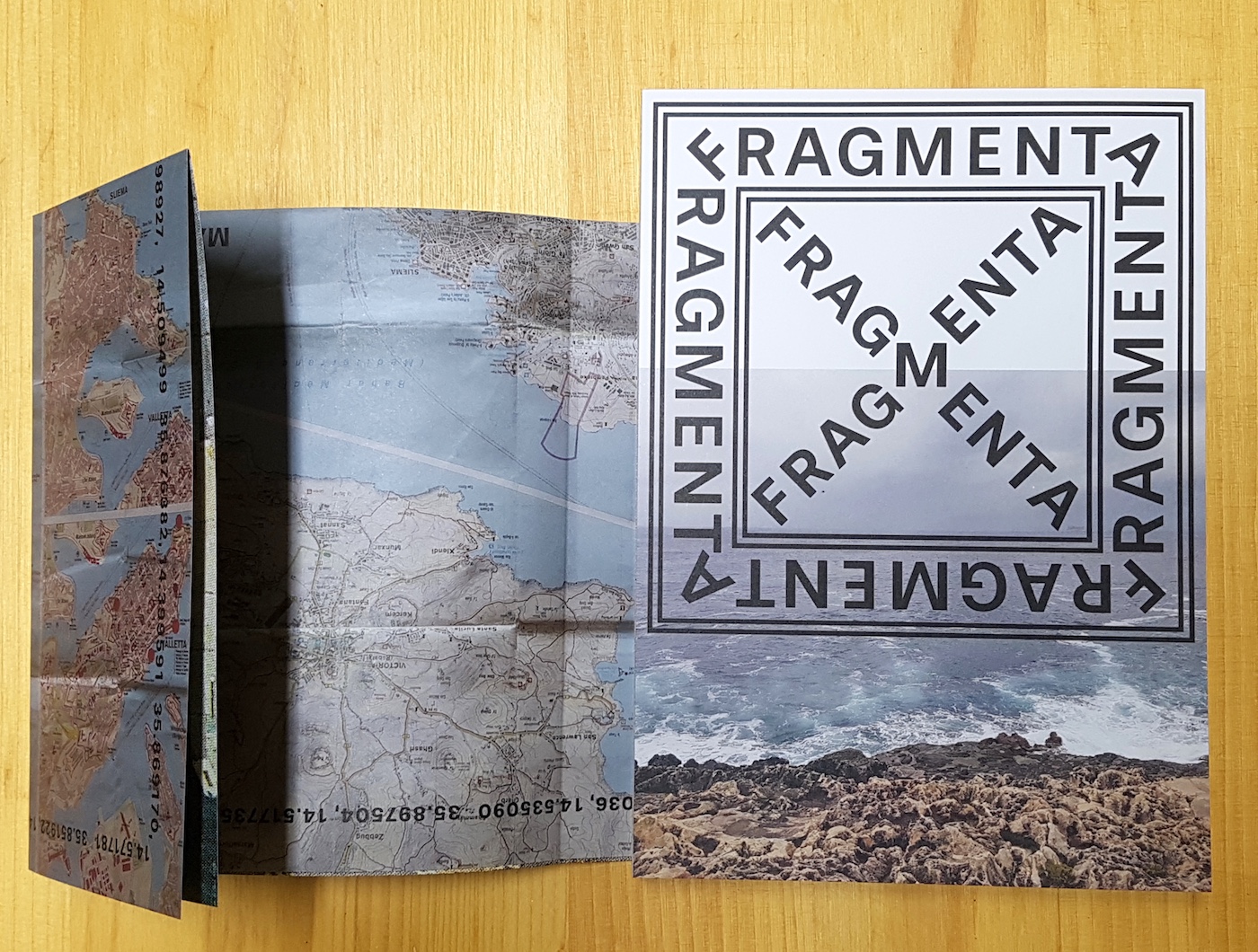