It is January, rainy and windy. On this Sunday afternoon, Keith and Molly arrive at the ferry terminal of Cirkewwa on the tip of Malta in order to board the ferry to Gozo. “Molly, do you want some coffee?” – “Yes, please.” Keith starts queuing at the kiosk. Molly observes the announcement boards and the other people in the ample hall – some are tourists like herself, some are expats, others seem to be locals, used to travel back and forth regularly. There is boredom of their posture. 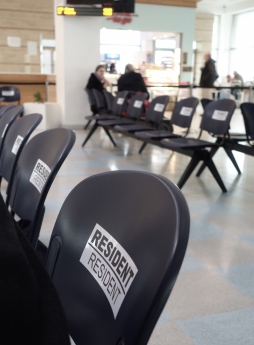 The loudspeaker system starts to announce in a solemn female voice: “There is nothing that man fears more than the touch of the unknown”. Molly looks around, she recognizes her own surprise in other people’s expressions. A young woman removes her earplugs and looks at where the voice was coming from. Now a male voice continues to announce: “If you look at the body of a human being from above, if you project the body as an ellipse onto the ground, with a body depth and a body width, representing the two main axis, you will get the minimum space requirement of a person. This requirement does not include clothing or any baggage carried along and is 0.085 square meter.”

Keith is back with 2 coffees. “… the theoretical value is 11 people by square meter…” Keith seems not to hear the loudspeaker, excited to share something with Molly. “While I was queuing, there was this guy with blondish hair at the kiosk, and he was arguing with 2 women, and kept on saying ‘I am a racist’ – it was really strange, like – why would he just blurb that out? The women seemed quite annoyed by him, but were still listening. All I could hear is that one woman said ‘But I am a foreigner as well’ and the guy replied ‘no, you are from the north, that is different.’ … and then he continued to talk about other stuff – by the way the guy at the bar constantly pokes his nose, it was actually a bit disgusting.” Molly examines her paper cup as if she had to check its contents. All of this was a bit confusing. “Can we sit down for a moment?” Keith walks into the hall with neatly placed aligned chairs. He stops short.

He looks around, looks back at his wife, and goes a step further. Coming back to her he says “There are only seats for residents here – look, they are marked. RESIDENT — .”

The loudspeaker woman is on again “All the distances that man creates around himself are dictated by the fear of touch. The repugnance to being touched remains with us when we go about among people. … We avoid actual contact if we can.”

“Do you think we are on candid camera?”

“Do you think we have to pay a fine if we sit down in a resident seat?”

“For gods sake, I just would like to find a seat for my wife!”

A group of children comes in, kicking a ball around, while shouting and squabbling. Their noise contributes to Keith’s disturbance. He storms into the hall; at the back he discovers various seats marked “TOURISTS”. They sit down. The row opposite has 5 seats marked with the sign “FOREIGNER”. The signs are written in 2 languages – Maltese and English – the Maltese word for foreigner is BARRANI, which literally means “Outsider”.

Advertisements for some funny local produce and locations decorate the walls of this otherwise sterile non-place. “This is horrible! We are not allowed to sit anywhere. This is discriminatory!!!”

Then the ferry arrives.